If you don’t believe in time machines then you clearly haven’t been on an aeroplane to Cuba!! Everything from the old American cars, seen all over the island, to the lack of Internet access gives off a real sense that you are in a different decade when you visit Cuba. 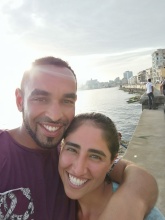 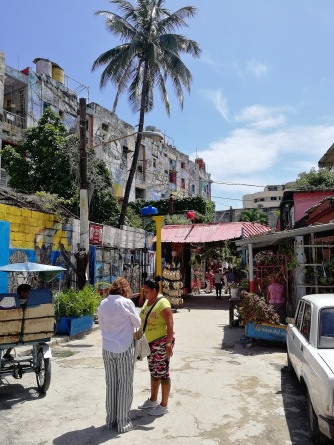 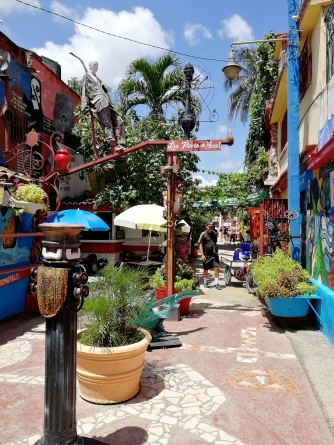 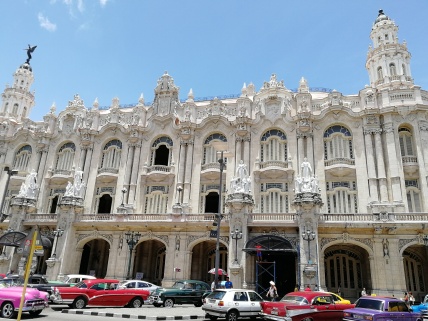 Myself and my girlfriend Karen spent two weeks in Cuba, visiting 4 different places in that time. It was an awesome and eye opening experience, visiting a beautiful country making a slow recovery from a war they couldn’t afford. On the whole there was a feeling that they are still only just getting used to welcoming tourists to the country. Once the people figure out that there is no way to rip you off or part you with some of your money then they can be very friendly.

Accommodation, outside of the chains of hotels that don’t allow you to explore the country, consist of what are called ‘Casa Particulars’. These are essentially airbnb properties (a lot of them advertised on airbnb) where you rent a room in the houses of local people.

Our first stop, in Havana, we stayed with an extremely friendly and helpful Cuban called Ani. The breakfast was really good, on the whole it was about the only meal of the day that was good in Cuba as the food throughout the country is extremely basic. The scrambled egg, toast and fresh fruit with a smoothie in the morning was also pretty basic but I always looked forward to it.

Walking out of the airport immediately you notice all of the old American cars that look like they come out of an old gangster movie. Although you expect to see them in Cuba I wasn’t prepared for them to be the only type of car around. Some of them were in really good condition, others looked like they have been running since 1950. Havana itself has a rugged beauty with its imposing buildings giving off a sense of danger but just a day or two makes you feel comfortable in the ghetto like surroundings.

You walk down the street, it’s safe to do so at any time of the day or night, and you can’t help but look into people’s living rooms that are right there beside the path. You get communities of people just sat at the side of the street, outside of their doors, either socialising or watching life pass them by.

We visited Cuba during the rainy season and generally the weather would be hot throughout the day before torrential rain hit in the afternoon/evening. On our first evening we ended up stranded in an athletics stadium where lots of locals continued playing football despite the mesmerising thunder storm going on above them.

We took an open top bus tour around the city, taking in the monuments and buildings, visited the main museum and watched a very loud cannon being fired, with an amazing view across the city with the sun setting, at the Fort. 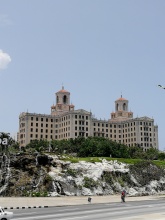 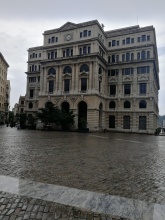 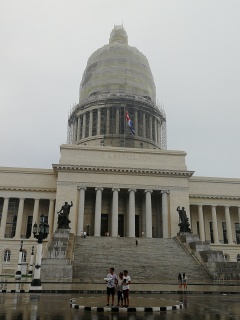 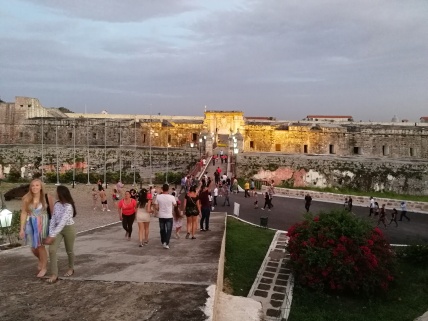 There is a real sense of national pride and the man portrayed as an evil dictator by the Americans, Fidel Castor, is celebrated as a national hero. You’d have to put more study than two weeks on holiday to really find out the true nature of the former Cuban leader. I couldn’t help but feel that perhaps Che Guevara was loved the most because he died a freedom fighter and didn’t have to go through the struggles of leading a country that was in deep debt due to their war of independence. In the wise words of batman: ‘you either die a hero or live to become the villain’.

All in all I enjoyed my trip to Havana and would highly recommend it to anyone who doesn’t mind going to specific Internet hotpots in the city to use (very slow) WiFi or eat basic rice and meat meals with not much variety. At least whilst eating the meal you can often listen to amazing live, high tempo, music that you can’t help but tap your foot to.

My third and final stop down the Quintana Roo was in Tulum and was probably my favourite place. Despite feeling ill, seeing a big-ass snake and swimming with a small-ass crocodile I really enjoyed my time there.

The bus from Playa Del Carmen took just under an hour and the bus station was about a 50 minute walk away from ‘Lucky Travellers Hostel’ where I was staying. Usually I wouldn’t have minded walking this distance but feeling ill as I was I decided to flag down a taxi.

The drive was literally straight along the road for about 10 minutes and the only navigation required was a quick lap of the block so we were facing the right direction. This, however, didn’t stop the driver, who knew only a few words in English, from constantly asking ‘where we go? Tell me! Tell me!’ It took me a couple of minutes to realise that the taxi driver was pretty drunk. Maybe after the second or third time of him pointed at a woman walking along the street and saying: ‘Look! Big Bum’.

Luckily the road was fairly quiet and didn’t have much traffic and I arrived to my hostel safely! The place was the first ‘all inclusive’ hostel that I’ve seen and was pretty good with free bike rental, a cinema room (shock some English guys were already in there watching football) and generally loads of space to chill out.

I forced some food down, which was average at best but I didn’t expect much better from a buffet, and took a laboured walk to the beach. Like Playa and Cancun the beach was full of seaweed but the potential could be seen beyond the brown waters and the horrid smell.

Each day the hostel organised an excursion on bikes. The two days that I stayed, we were taken to different Cenotes (pronounced say-no-tays) by a tiny Brazilian guy who originally came to Tulum for a few weeks and ended up staying for 6 months.

A Cenote is pool of water stretching underground and there are lots of them found around the Yucatan area, many linked to each other and the sea by underground tunnels. There are open, semi-open, underground and cave Cenotes. The first day we visited a cave and the second was open. 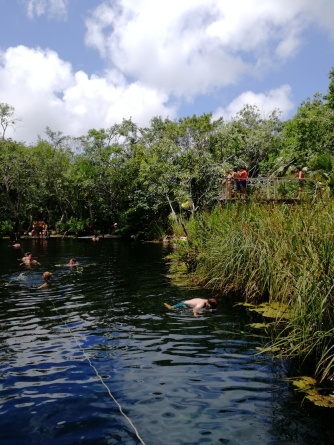 The connection of underground tunnels allows wildlife to arrive in the Cenotes and in the cave, besides many fish that would bite your toes in a free pedicure, there was a baby turtle. They also had some turtles in an old bath tub where they held them before being released somewhere (less tourist infested) later. In the open cenote I even spotted a baby crocodile in the reeds which only made me question where mummy and daddy were.

The cave Cenote was basically just a few holes in the ground. A couple of small holes were about a meter or two wide and the main hole about five meters. Down the main hole was a rugged ladder so people could climb up and down into the bat infested cave or most people just jumped the 4 meters down anywhere that they weren’t likely to land on someone’s head. I was surprised whilst inside to see a bunch of bubbles appear in the water, they were promptly followed by a man in full scuba gear who had been exploring the underground rivers.

The next day we went to an open Cenote. The guys at the entrance warned us that there was a baby crocodile around, which I spotted almost as soon I jumped in, off the man-made diving platform. It was kind of like a big pond with clear water (which made it kind of creepy) and a beautiful jungle back drop, the water was very refreshing on a hot day. 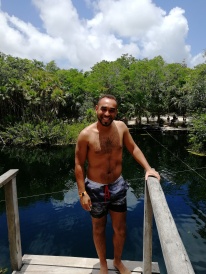 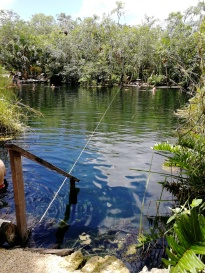 The other thing that I did during my short stay in Tulum – which is a typical thing to do in Mexico – was to visit the ruins. The ruins of Chichin Itza were impressive but these ones were visually stunning.

I took a walk through the jungle and then ducked through a small arch before being hit with a large plane with buildings spaced out on lush green grass with a backdrop of beautiful blue skies that ended with the cliff to the ocean below. The scenery was so stunning that I didn’t even think how impressive the buildings, built thousands of years ago by the Mayans, actually were. 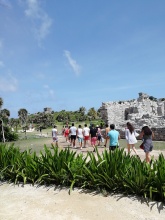 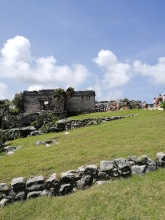 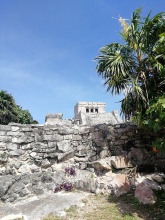 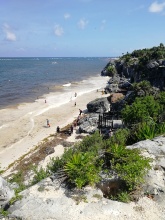 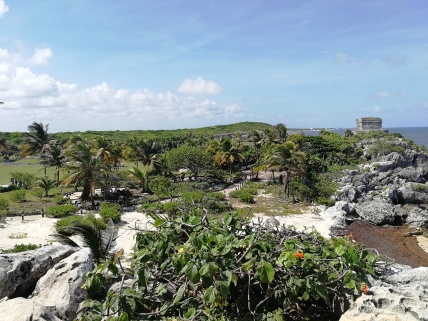 On the way out of the ruins, again through a jungle (but a wide man made path) I was scanning the trees to my left when I had to double take. The tree which I thought had strange patterns actually had a big snake coiled around the branch. Thankfully it wasn’t moving so I stopped long enough to snap a picture and made my way out of there sharpish. 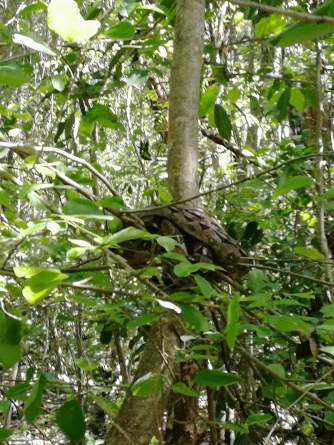 Tulum was a good way to end my week alone in Mexico before heading back to Cancun to meet my girlfriend Karen and continue my travels on to Cuba.

The second stop on my Mexican Adventure took me just over an hour south of Cancun to Playa Del Carmen. Buses run very frequently and I opted for an ADO luxury coach with toilet, comfortable reclining chairs and a movie (in Spanish) for a bank breaking 60pesos (about £2.40). The other option was a ‘collectivo’ minibus that costs 45 pesos.

On arrival into Playa I instantly liked it more than Cancun. There are lots of bars and restaurants all leading down to the beach which unfortunately, just like Cancun, was full of seaweed that made it look unattractive and smelled even worse.

The hostel, ‘La Isla’ that I stayed at was right on the beach. From the balcony you could see along the (smelly, ugly) beach. It was also right above Senor Frogs so it’s a good thing that I can sleep through almost anything, as their music was loud until the early hours of the morning.

On my first night I didn’t even notice that the music was playing, or maybe I got back late enough (and possibly drunk enough) that it had stopped.

As soon as I arrived at the hostel I met a guy from the West of Mexico who was in Playa searching for work. He hadn’t been very successful due to the temptation to go out and party all the time. He took me to a local restaurant, away from the tourist area for cheap Quesadillas and we got some drinks to have down the beach.

We ended up going out with an American in his mid 30s on some kind of midlife crisis. He came out with no money, spent the night trying to hit on girls 15 years younger than him and always wanted to ‘find somewhere better’ than the free bars that we were confined to, as I definitely wasn’t about to pay his entrance fee. Despite this guy it was a good night with a nice vibe.

The following day I met up with some ship friends. Ilke, who I met in Cancun, came to catch a ferry with me to Cozumel and we had a nice meal with our friend Annie who’s ship, Oasis of the Seas, was docked. Annie followed me to my first two ships Mariner and Indy and we remain good friends meeting up when ever we are in the same place at the same time.

After cocktails at ‘no name bar’ where crew members visit whenever they dock in Cozumel, we headed back to Playa. Ilke and me had a couple more drinks and her boyfriend came to see us and drove us to get some street food.

The following day, not feeling good at all, either because of the all day drinking, with cheap cocktails or the street food, I watched Mexico beat South Korea 2-1 before heading for my next stop in Tulum.